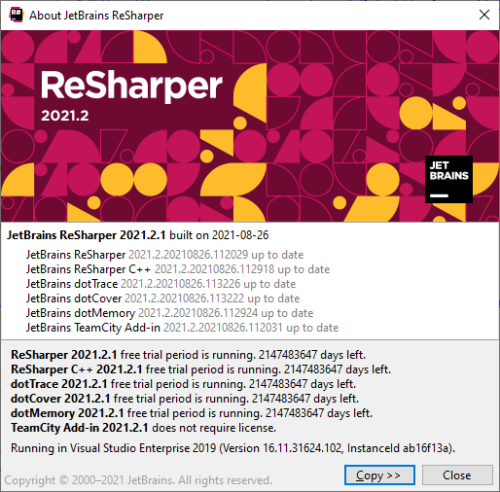 dotUltimate is a set of JetBrains products that includes an IDE and tools for .NET developers (Rider, ReSharper, dotCover, dotTrace, dotMemory, and dotPeek), as well as ReSharper C++ for C++ developers who use Visual Studio.

In late 2014, we have changed the development process for ReSharper tools (ReSharper, ReSharper C++, dotCover, dotTrace, and dotMemory) so that all of them share a set of common assemblies. This helped drastically reduce the memory footprint of ReSharper tools when integrated in Visual Studio, and make Visual Studio much more responsive whenever a combination of these tools was installed.

This change however does have a downside: in order for multiple ReSharper tools to share a set of common assemblies, they have to be of exactly the same version. In practical terms, there is only one combination of versions of ReSharper tools that you can integrate into a single installation of Visual Studio side-by-side. Fortunately, it does not affect Rider, since it is a standalone IDE, which doesn't have any Visual Studio integration.

For example, if you had ReSharper 2019.3 and dotCover 2019.3 installed and you now run a dotTrace 2020.1 installer, the installer will by default try to update ReSharper and dotCover to version 2020.1 so that their versions match the version of dotTrace that you're trying to install. This behavior might be unwanted for any reason.

Unfortunately, there is no guaranteed solution to this problem. However, there are workarounds available to prevent upgrading existing installations of ReSharper tools when installing or upgrading another ReSharper tool:


PLEASE SUPPORT ME BY CLICK ONE OF MY LINKS IF YOU WANT BUYING OR EXTENDING YOUR ACCOUNT
https://nitro.download/view/D2CEB31A6833E1A/2021.2.1.rar