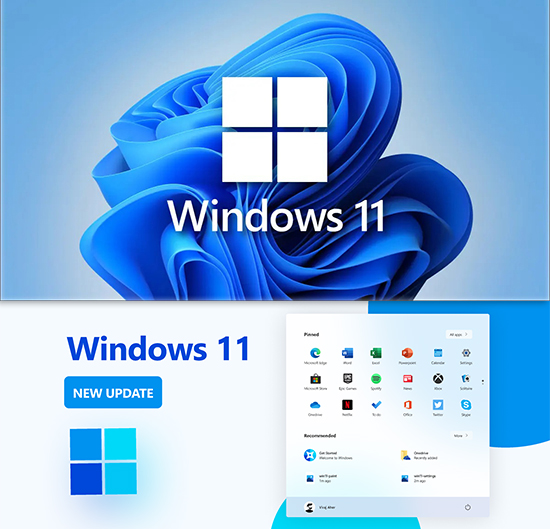 The images are made with the original UUP files on the UUP Dump service . Updates are integrated until December 15, 2021 .


Detailed description of changes in Windows 11 build 22523.1000
General Information
• This build will be offered for PCs with ARM64;
• This is the last build this year.
Changes and Improvements
• Microsoft shows binding groups in ALT + TAB and in task view just like when you hover over open applications in the taskbar, and you will see them there with all the insiders in the Dev Channel;
• When Explorer is open in "This Computers", the option to add a media server and (if necessary) remove a media server is now available when you click "..." in the command bar;
• As part of an ongoing effort to move settings from Control Panel to Settings app:
• Links to Programs and Features in Control Panel now open under Settings> Apps> Installed Apps;
• Microsoft is moving uninstallation of updates (for cumulative updates, etc.) from Control Panel to a new page in the Settings app under Settings> Windows Update> Update History.
Fixes
[Taskbar]
• Fixed an issue with initializing text input, which could cause the shell (for example, Start menu and search) to stop responding on PCs with ARM64;
• The battery icon tooltip should no longer unexpectedly show a percentage above 100;
• Application icons should no longer overlap the date and time on secondary monitors with a large number of open applications;
[File Explorer]
• Did some work to fix an issue that sometimes caused the keyboard focus to lose focus after pressing Enter when using F2 to rename OneDrive files;
[Spotlight Collection]
• After enabling the Spotlight collection, your first image (after Whitehaven Beach) should arrive a little faster;
• Added icons to the context menu items of the Spotlight collection;
[Enter]
• Improved the reliability of the voice typing call;
• Fixed an issue due to which the border of the text input experience (voice typing, emoji panel, etc.) was displayed incorrectly when the contrast theme was enabled;
• Reduced intermittent crash of the pen menu process if it was started and then immediately closed before it was launched;
[Widgets]
• Fixed an issue due to which links did not open properly when opening the widget panel by hovering the mouse cursor;
[Settings App]
• The contents of the Settings application should no longer be cropped off the side of the window when the Settings application window becomes small;
• Settings should no longer occasionally crash when opening combo boxes, affecting some settings such as the ability to set custom click actions for the pen;
• Fixed an issue due to which the "Add device" option in the "Bluetooth and devices" section silently crashed when trying to connect new Bluetooth devices;
• Added a number of keywords so that the voice access function is displayed in the search results of the settings;
[Other]
• Fixed an issue that caused bug checks to occur on computers with ARM64 with reference to a memory management error in the previous build;
• Fixed an issue that resulted in a crash DWM (which led to multiple flashes of the screen) when trying to use some applications;
• The problem that caused some applications to freeze when launching the announcer has been mitigated;
• Added some missing information when examining details in the properties of narratorquickstart.exe;
• Fixed an issue that resulted in the announcer not responding to UIA events such as notifications, real-time regions or text events.
NOTE: Some of the fixes flagged here in Insider Preview builds from the active development branch may make it into servicing updates for the released version of Windows 11, which went public on October 5th.
Known Issues
[General]
• You may be unable to log into some applications such as Feedback Hub. Restarting your computer should fix the problem;
• Microsoft is investigating reports that some insiders see failures when updating drivers and firmware in the latest builds with error 0x8007012a;
[Start Menu]
• In some cases, you may not be able to enter text when using search from the Start menu or taskbar. If you have a problem, press Win + R on your keyboard to open the Run dialog box and then close it;
[Taskbar]
• The taskbar sometimes flickers when switching input methods;
• The network icon sometimes disappears from the taskbar when it should be there. If you encounter this, try using the Task Manager to restart explorer.exe;
• If you have multiple monitors connected to your computer and you right-click the date and time on the taskbar on the primary monitor, explorer.exe will crash;
[Search]
• After clicking the search icon on the taskbar, the search bar may not open. In this case, restart the Windows Explorer process and open the search bar again;
[Settings app]
• When viewing a list of available Wi-Fi networks, the signal strength indicators do not reflect the correct signal strength;
• Settings app may crash when going to System> Display> HDR;
• In the section "Bluetooth and Devices" there is an empty entry;
[Spotlight Gallery]
• If you are using the Spotlight Gallery, the current image is currently not migrated on upgrade, so you may have a black desktop background after upgrading to this build. This should be fixed in the next build;
[Widgets]
• Changing the alignment of the taskbar may cause the disappearance of the "Widgets" button from the taskbar;
• The widget panel may have the wrong resolution when hovering over the entry point on the secondary monitor;
• The widget panel may be temporarily empty;
• If you have multiple monitors, the contents of the widgets on the taskbar may not sync across monitors;
• If the taskbar is aligned to the left, information such as temperature is not displayed. This will be fixed in a future update;
[Voice Access]
• Some text creation commands, such as "select that" or "delete that", may not work as expected in Windows applications;
• Some punctuation marks and symbols, such as the @ sign, are not recognized accurately.