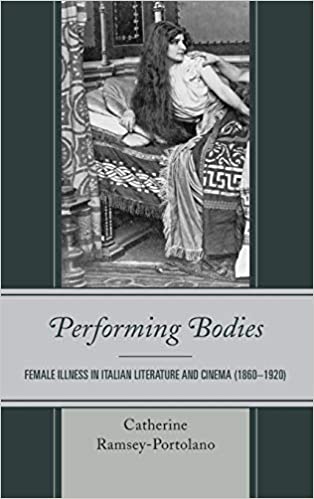 Performing Bodies: Female Illness in Italian Literature and Cinema (1860–1920)
English | ISBN: 1683931319 | 2017 | 146 pages | PDF | 968 KB
Performing Bodies: Female Illness in Italian Literature and Cinema (1860-1920) explores the variations in the portrayal of female illness in Italian fin de siècle literature and early cinema. Catherine Ramsey-Portolano begins her study with an overview of nineteenth-century theories on female inferiority and nervous disorders, especially hysteria. 19th-century European scientific and philosophical discourse on women’s bodies, which focused on female biological functions and malfunctions, accompanied an abundant fin de siècle literary representation of female illness, a theme which also carried over into the cinematic genre of diva films of the 1910s. Ramsey-Portolano’s analysis of fin de siècle Italian literary texts first discusses those novels in which illness represents the consequence and at times punishment for women who transgressed traditional societal roles and norms of behavior. Ramsey-Portolano also demonstrates, however, that there also existed within a portrayal of female illness which suggested sickness as a form of agency for women. Rather than depicting women as powerless victims who succumb to illness due to the pressures and limitations of patriarchal society, this second group of novels posits illness as a means for women to take control of their bodies and demonstrate self-mastery through illness as a chosen form of behavior. Performing Bodies: Female Illness in Italian Literature and Cinema (1860-1920) concludes with a discussion of the role of female illness in Italian cinema of the 1910s. Ramsey-Portolano analyzes the films Tigre reale (1916) and Malombra (1917), featuring the divas Pina Menichelli and Lyda Borelli, to show how illness granted centrality to the female character. By placing the diva and her point of view at the center of the film’s action, these films posit the female character as the active one in advancing the story, thus providing a progressive model for female Italian viewers and an early example of the female gaze in Italian cinema. Performing Bodies: Female Illness in Italian Literature and Cinema (1860-1920) examines how in Italian literature and film, as well as in society, women were confined to traditional roles and illness often represented the consequence for transgressing those roles. Feigning illness offered women a way to “own” the illness and become manipulators and masters not only of their bodies but of their stories and destinies.